As an artist, the human figure has fascinated me for most of my career since the early 60‘s. I believe my sustaining interest in the human figure is probably due to the fact that my own body is the closest resource from which I draw my ideas. The human body is also an image that gives affirmation of my own existence, and serves as a visual diary and marker of time. It also documents and reflects the civilization in which I live.

Perhaps this sustaining interest is also a continuation from my female childhood fascination with play-acting with dolls. I have legitimized this imaginary behavior in my adult years by working as an artist, modeling human sculptures in illusory states in which I control a personal story line. At times I draw parallels to nature and human communities by using complex arrangements that I find fascinating in my observation of nature and its teeming energy. At other times I draw imagery from the interwoven parts of human behavior found in every day life, or in observing societal concerns. Using sources such as these, I am able to satisfy the visual curiosity that appears in my own mind’s eye.

In my earlier work, I portrayed the human body “realistically” to persuade the viewer to step into the authenticity of the scenario of the work. Over time, however, my exploration of the figure has continued to move away and evolve from a realistic representation of the human body into a simpler, reductive but exaggerated form, with details left for extremities and facial features in order to tie the body back into some sense of reality.

My current work involves further analyses of the figure by exploring the surface in a purely two-dimensional inquiry. This allows me to minimize embellishment and color through simple abstract form as a reference to an unspecified time. I want the two-dimensional surface work to seem independent of the three-dimensional form of the figure, as though it is passing over the figure, thereby giving illusion to two independent spatial realities coinciding with one another. This reductive abstract surface has seemed to further eliminate the reality of realistic surface painting, in this case clothes, and works in tandem with the simplification of the body and form.

What has remained with the figure over time is the narrative nature of the subject matter and details of facial features and extremities. The elimination of these components in future exploration remains to be seen. 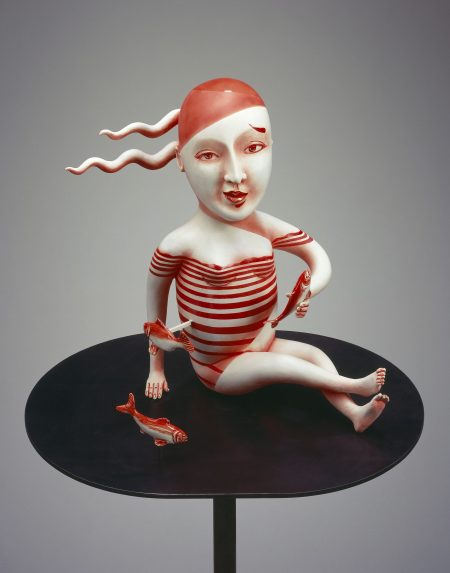