I am interested in functional pottery because of its long history and close proximity to humankind. Through use and display, pots will impart meaning that will change during the user’s relationship with the work. The objects we interact with on a daily basis can conjure experiences in our lives, often becoming an article of sentiment. The pieces that I produce are inspired by both architectural and natural settings. I intend to exploit the beauty of ceramic materials as a
means to draw comparisons to these ideas without replicating them directly or realistically. Most of the works that I make are created as systems to coordinate how the object operates by itself or within a larger arrangement of components.
Investigation into design and function is a really important aspect of my practice.
The works that I create are intended for a specific function or made for a particular purpose. I am interested in using a variety of forming techniques such as wheel throwing, hand-building, slip-casting in conjunction with 3d modeling to create work.  Often times I utilize these techniques within the same piece as a means to blur the concepts and associations to individuality and mass production.  I like finding a balance within my work where the evidence of the &quot;hand&quot; is at times present and other times fleeting yet all of the pieces speak of one of the potter’s greatest strengths…individuality.

Paul Donnelly is a studio potter residing in Kansas City, MO. He is currently an Associate Professor of Ceramics at the Kansas City Art Institute working with students in the vessel concentration. He received his BFA from Edinboro University in 1997 and his MFA from the NYSCC at Alfred University in 2008. He has participated in residency Programs at The Clay Studio in Philadelphia, The Pottery Workshop in Jingdezhen, China and Watershed Center in Newcastle, ME. He has exhibited both nationally and internationally and has been published in numerous books &amp; periodicals. 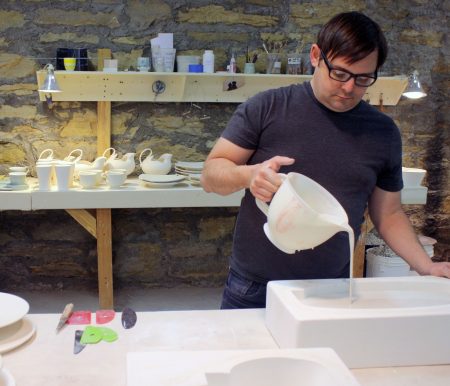